Legislators put the cannabis into Canada last week, as the nation became the first major world economy to legalize marijuana for recreational use. Now, as the barriers come crashing down across North America on the sale of what was once reviled as “Reefer Madness”, it’s fascinating to watch how retailers are responding.

A whole new crop of “marijuana merchants” (and support services) are popping up, literally inventing the category as they go. In anticipation of what might be called “the green wave”, an event was recently held in Chicago to help puzzle out “The Future Of Cannabis Retail”.

“We are yet to become familiar with what a cannabis store should look like,” observed organizer Gwen Morrison, CEO The Store WPP*, The Americas. “Right now, the experience is inconsistent, as the category extends from the cold dispensary formats to lifestyle boutique.  In the future, some stores may look like bakeries, others may take on the look of fine jewelry. As the BBC recently speculated, ‘seedy headshops’ could be a thing of the past.”

One of the panelists at the event, Steve Weisman, CEO of Windy City Cannabis, believes that the best cue for the nascent category is specialty retail, with “the foundation…the knowledge of the employees”. Hence the importance of the “budtender”, the industry’s term for expert sales associates. “Having well-educated, very polished staff is incredibly important and it will drive the entire experience,” said Weisman.

Another event panelist, Bethany Murphy Gomez of cannabis research and insights organization, the Brightfield Group agreed. “You walk into a dispensary and there are a hundred different products…you have no idea what half of them are…no idea what to use, how to dose it, what’s going to work for you…that’s why education is absolutely critical.” 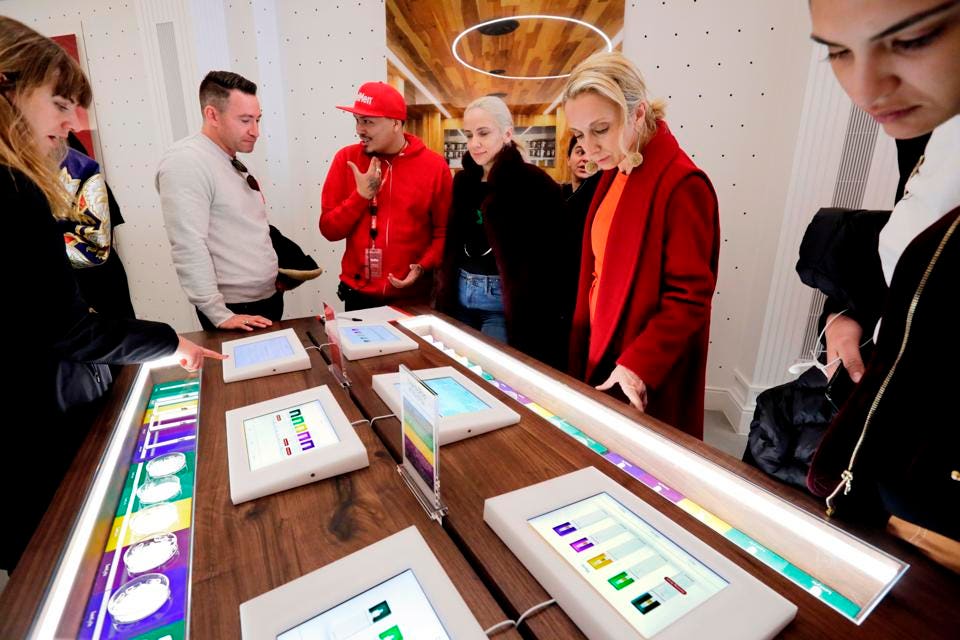 Contemporary, service-driven, experiential retail may be a good guide to where “weed-tail” will go. In the U.S., publicly-traded cannabis company MedMen has been celebrated as the “Apple Store of Weed”.  As they state; “we do not run pot shops, we manage class leading retail stores that happen to sell marijuana.” Hence the stores are open, clean, modern, with iPads on central tables providing more information, upscale-looking branded product on the walls, t-shirt-wearing  budtenders to help customers, and purchases placed in “iconic” fire-red shopping bags.

One of the new retailers building buzz in Canada is Fire & Flower, which has just been granted interim licenses to trade in two provinces, with big plans to be Canada’s dominant player. CEO Trevor Fencott aims for “best-in-class store design that will aim to elevate the retail experience” and talks of “cannistas” (cannabis baristas) serving “guests”.

Back in the U.S., if MedMen is the Apple Store, San-Francisco based cannabis delivery service Eaze is the “Uber for weed”. The service offers marijuana and accessories ordered on an app and delivered to your doorstep in under an hour (and often considerably faster), across major cities in California. As much as anything, Eaze is a data play, providing the dispensaries it serves with a wealth of information on the cannabis consumer. As Cameron Forni, a supplier of vaporizer cartridges, told Ad Age, “it’s been amazing to see their…consumer insights around our brand.”

Aside from the start-ups, serious retail expertise and investment dollars are starting to hit the industry. Ohio’s Schottenstein family – investors in DSW and the driving force behind American Eagle Outfitters – are backing a venture called Green Growth Brands. The CEO of Green Growth, former Victoria’s Secret and American Eagle veteran Peter Horvath, believes that the fundamental rules of retail apply to this new category. “There are some critical differences, but 90 percent of what customers experience and what they expect is the same.”

Where to from here? Gwen Morrison cautions that there are many legal and logistical hurdles for operators and suppliers wanting to become national brands, certainly across the U.S. At the same time, Morrison says that the “marketing and store design opportunities are exciting” and “the whole concept of marijuana brands is a fresh canvas”.

This may well turn out to be one of the more interesting retail experiments in recent times.