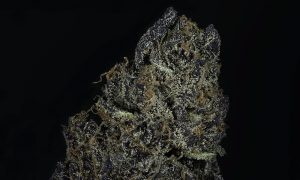 Illinois medical marijuana cultivator Green Thumb Industries is reporting that a recent batch of house cannabis strain Brownie Scout has tested at a whopping 37.5 percent total potential THC. All of the THC present was in the form of THCa, with no Delta 9 THC detected. Samples of the strain were tested by ACT Laboratories, with results from the analysis released on May 5. Representatives of Green Thumb Industries (GTI) told High Times in an email that the flower is the most potent the lab has seen and they believe that the 37.5 percent THC test result is a record-setting achievement.

Brownie Scout is a GTI exclusive strain that is a cross between Koser Kush and Platinum Girl Scout Cookies that was bred at the company’s facility in Rock Island, Illinois. Representatives at GTI say the strain has been popular with patients, who report therapeutic effects including relaxation, pain relief, and anti-anxiety benefits since the medical marijuana program began in Illinois in 2015.

“Consumer satisfaction is paramount to GTI,” said Kate Denton, the senior vice president of Marketing at GTI. “Our last 4 harvests of Brownie Scout have yielded highly potent flower, consistently testing in the mid to high 30% of THC. Paired with the terpene profile and crystal flower, this is a product that delights both the consumer and our retail partners.”

GTI plans to sell the 37.5 percent THC batch of Brownie Scout as flower under its brand Rythm and in Dogwalkers brand pre-rolled joints.

“The Rythm brand is the cornerstone of the GTI portfolio and it all starts best in class cultivation,” Denton said. “Brownie Scout was grown in house by our expert team of growers. It has become beloved by patients and adult use consumers (where adult use is legal) for its relaxation and pain relief properties.”

How High is Too High?

High test results for THC can be a contentious issue in the highly competitive cannabis market. When Portland cultivator 7 Points Oregon’s strain Future (#1) tested at 37.28 percent THC last year, critics cried foul, claiming it’s just not possible for flower to contain that much THC. But even that assertion is controversial, according to Mowgli Holmes, the CEO of cannabis research firm Phylos Bioscience.

“The general consensus seems to be that the physical limit is gonna be around 35 percent,” said Holmes. “But we don’t really understand that or why it is. We’re just guessing. So could a plant get to 37 or 38 percent? Maybe. Probably. Not impossible. It is pretty unlikely, though. The main point here is: Why the fuck would you want a plant that strong? That’s like going to 180 proof from 150.”

The grower, 7 Points Oregon, acknowledged that not all cannabis consumers are looking for super-potent weed, noting that THC is only one factor in top-quality bud.

“For most of our team, a cultivar that hits 30 percent or above is too potent,” they wrote. “And we are big advocates of the concept that THC percentage is only part of the story regarding cannabis. Lesser-known cannabinoids and terpenes play a vital role as well. We acknowledge that THC numbers do matter to consumers in the Oregon recreational market—some look for terpenes, some for THC. As far as we’re concerned, both perspectives are valid.”