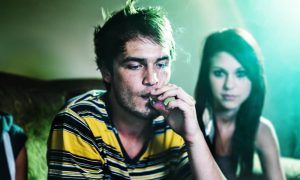 Conservative pundits at right-wing media outlet Fox News are at it again. The network is known for taking hardline conservative positions on everything, often lying and spreading misinformation along the way.

Now, the network is back on the “reefer madness” bandwagon. This time, Fox News spokespeople and other right-wing talking heads are making the spurious claim that legal marijuana is responsible for a host of social problems, including homelessness, poverty, and teen drug use.

On a recent episode of “Fox & Friends,” the network’s right-wing propagandists had plenty of anti-cannabis rhetoric to spread. In the wake of Canada making cannabis legal earlier this week, the talk show turned its focus to the U.S. In particular, they talked about whether or not the U.S. is on course for legalization.

At one point in the conversation, co-host Steve Doocy asked his guest commentators about legalization. He said: “Is it a good idea… to legalize pot nationwide here in the United States? Canada just did it.”

The first person to respond to the question was a guy named Joe Peters. At Fox, the fact that he’s a former cop qualifies him to be an authoritative voice on complex social and political issues.

The reality, though, is that Peters is a far-right authoritarian who supports the harmful, violent, and fundamentally racist war on drugs.

Peters responded that legalization would be a bad idea. As proof, he pointed to Colorado. Here’s what he claims has happened in the state since it made marijuana legal:

“By every metric, it was a failure, in my view. Teen drug use is the highest in the country—teen drug use. Drug driving is off the charts, doubled with marijuana impaired driving. Homelessness is up. Emergency room admissions.” He goes on and on from there.

The problem for Peters and the rest of the “Fox & Friends” staff is that this entire line of reasoning is based on lies and misinformation. It’s propaganda, not fact.

For starters, legal marijuana has not catalyzed any significant drug-related problems among teens. In fact, teen drug use has remained remarkably unchanged, even as more and more places begin to legalize cannabis.

Actual stats about teen marijuana consumption and drug use paint a very different, much more complex reality than Peters would have it. For starters, stats show that teen consumption of marijuana has remained relatively static for the past seven years or so—even in places with legal weed like Colorado.

It is true that 2017 saw the first uptick in cannabis consumption among teens. The number of teens who consumed weed in the prior year rose 1.3 percent. But that’s the only noticeable change in nearly a decade.

What has changed among teens is the number of young people consuming nicotine. The metric where the biggest changes has happened is in vaping. In that category, teen use is definitely on the rise.

But this has nothing to do with weed. And Fox didn’t express a whole lot of concern over this trend.

Similarly, Peters’ claim that legal weed causes homelessness is false. Studies and data simply don’t back him up. For example, a study of legal marijuana in Pueblo, Colorado was published in March.

The report explicitly concluded that “legal cannabis has not had a significant impact on homelessness rates.” Instead, the study found that “disconnected utilities” were the “largest single cause of homelessness in Pueblo in 2016.”

Ultimately, Peters and the rest of “Fox & Friends” are focused  on moving the conversation away from the realities at the root of poverty and homelessness: the rising cost of living, lack of jobs that pay a living wage, lack of affordable housing, inaccessible resources, racism, homophobia, transphobia, intimate partner violence, and more.

Instead, they spread a bunch of lies about cannabis to push a far-right agenda aimed at protecting power and criminalizing already-marginalized communities.