NFL and Marijuana: Players Hope for Change in Punishing Policy 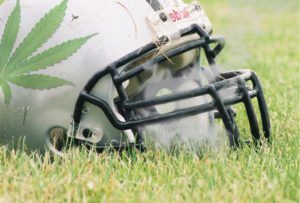 TORONTO — The pain wasn’t the same as a midair smack from a hulking linebacker while coming across the middle, but former Detroit Lions superstar receiver Calvin Johnson said he needed some serious relief during his 2016 season on “Dancing with the Stars.”

“When I was on the dancing show, I was using a CBD (the non-psychoactive ingredient of the cannabis plant) topical that my buddy gave me because my ankles were swelling up so much that I didn’t think I would be able to finish the show,” Johnson said during an interview with the Detroit Free Press during the Toronto Cannabis Conference last month. “The relief happened almost overnight. I was already open-minded to marijuana, but after that, I became a true believer just because of the experience.”

The topicals helped him stay on ABC-TV’s popular dancing competition, where he made it to the finals and finished third out of 13 contestants.

“When I was finished playing, the prescriptions from the docs stopped. It’s a slippery slope when you come out of the league and you’ve got all the Oxy and Vicodins or whatever you have to manage the pain,” he said. “There has to be a substitution and cannabis ended up being that for me, and helped my wife,” who suffered from Crohn’s disease.

The two gridiron stars, who retired from the Lions — Johnson in 2016 and Sims in 2015 — became partners in some real estate deals. But when Michiganders voted to legalize marijuana for adult recreational use last November they switched gears, and now are looking to break into the legal weed business in the state.

If they get licensed by the state, they hope to open a grow and processing operation in Webberville and the Saginaw/Bay City region, as well as dispensaries in different locations across the state. Johnson has gotten pre-qualified by the state for a dispensary license, but was one of dozens of entrepreneurs who lost out in their bids for one of 13 coveted dispensary licenses in Traverse City that were awarded earlier this month.

That’s not stopping their bigger plans with a marijuana product line that will go by the name Primitive.

“The word Primitive comes from the idea that there is this medicine we used for thousands of years before we got into the opioids and stuff,” Sims said. “We believe that the benefits and the healing from cannabis comes from a simpler time.”

The two are among a growing number of former professional football players who are not only advocating for the National Football League to relax its rules against marijuana use, but also are getting into the lucrative business.

Eugene Monroe, a retired lineman for the Baltimore Ravens, has become a passionate cannabis activist, urging the NFL to lighten up when it comes to pot.

“It’s time for the NFL to change its archaic standards to better protect its players,” he said on his website. “For too long, I’ve watched my teammates and good friends battle with opioid addiction and leave the game with a long road still ahead; it’s time to make a change.”

Monroe, who has donated $80,000 to research on the potential benefits of CBD in treating brain injuries, also is a partner in Green Thumb Industries, a marijuana grow and dispensary business.

Willis Marshall, a Detroit resident and professional football player with 12 years in the Canadian and U.S. Arena football leagues, is producing and selling a line of CBD-infused hair and skin care products under the DaO  label. He’s looking to expand into products that will also contain THC — tetrahydrocannabinol, the psychoactive ingredient in the cannabis plant that produces the high associated with marijuana.

“Even in the Canadian Football League, where they don’t test for marijuana, prescription drugs are a dime a dozen in the locker rooms,” he said. “They hand them out like candy corn and that’s an unfortunate thing.”

And Terrell Davis, the Hall of Fame running back with the Denver Broncos, is launching a CBD-infused line of drinks under the brand name Defy later this year. But it’s strictly hemp-based rather than any connection with marijuana and THC.

In a blog published in Forbes magazine, Davis wrote, “It’s very important to note that if you use a CBD product derived from marijuana, THC may show up on a drug test, which is why athletes prefer hemp-based CBD.”

There’s a good reason why football players are waiting for retirement to get into what is increasingly becoming a legal business in many states across America.

The NFL has a strict policy against substance abuse, including marijuana, even though it’s legal for adult recreational use in 10 states, including Michigan, and for medical use in 33 more states.

Neither the NFL nor the NFL Players Association union returned phone and email messages from the Free Press to talk about marijuana policy.

Under the NFL’s current contract with players, which was signed in 2011, players are tested once a year between April and August. A first positive test for marijuana lands a player in a substance abuse program without a suspension. That first offense also means that the player will get randomly tested for drugs at any time during the year, even in the offseason.

That has been a costly proposition for dozens of NFL players. In the last five years, 117 players have been suspended for substance abuse violations, lost $43.9 million in salary and 552 days of playing time, according to Spotrac.com, a New York-based company that tracks and provides data on major league sports payrolls and contracts.